The last few days of our trip were hectic and stressful, while we prepared for our shows, then sweet and mellow, as we tied up loose ends, divvied up the stuff and then scattered. Though both shows in Manhattan and Brooklyn were riddled with technical weirdness (a spaceship of a stage and the throbbing reggaeton from a nearby block party) our audiences were both enthusiastic and engaged, which was really lovely.

While we didn’t get to work on the play as much as I would have hope over the course of the trip, there’s no question that it nevertheless got better as the summer went on. The dialogue became clearer, the choices we made on stage were sharper, and our focus became more present. It was interesting to take note of what the effects of only doing the show once a week had on the play itself. 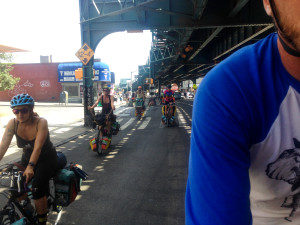 In some ways I’m sure it sometimes made our performances more sloppy, but I think it also meant that every week there was a moment of “Oh yeah, this!”- a forgetting and then suddenly remembering. And each time this awakening happened, it happened on a new stage, in a new space in a new city, and after another week on the bikes that had no doubt been strange and trying and epic in its own way. And though I’d have difficulty explaining how exactly, the way we shifted inside the play always felt somehow informed by the week on the road that we had just emerged from.

Our last show in Brooklyn was, in a way, the culmination of the whole trip and the end of the summer. Because of this, the performance had a soft sort of steadiness and a quiet confidence. We moved through each moment one last time, and then it was over.

After we packed up our set and props and changed out of our costumes, we biked down to Coney Island, just the seven of us and a couple of friends. We ate hotdogs and did tenshingoso (a Japanese meditation technique that we used to center ourselves before each show) one more time on the beach and then quietly biked back to the house to sleep.

And that was it.

That was almost a month ago. And since then, some of us are already back in California, some are spending time on the East Coast, and some are still traveling. And more than a few of us are still in a transitional moment, not quite sure what comes next.

Life has, for better or for worse, resumed a kind of familiar, daily rhythm. Now, at the grocery store, I’m just another person in jeans and a t-shirt quietly buying ingredients, instead of an “Agile Rascal!”- a troupe of haggard, neon clad, probably slightly smelly bike tourists with a cart full of energy bars and jerky, who prompted inquiry and disbelief wherever we stopped to rest.

In some ways, the summer already feels far away. The thing that took over our lives for three unrelenting months, that was inescapably all around us, has suddenly been gathered up, stuffed in a box and shoved under the bed. I imagine in the future we will, on occasion, pull it out, blow off the dust and peer at it with curiosity.

“Oh wow. Remember when we did that? Yeah, that was crazy!”

But recently, I have been finding myself in still moments, being overcome by a wave of relief, just a big whopping sense of gratitude and incredulousness and relief.

Because we did it. Whatever that thing was, we did it. 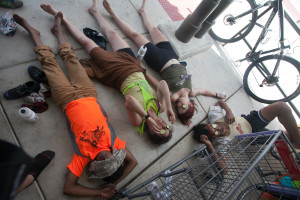 Personally speaking, it was harder than I thought it was going to be. (I can hear the retort echoing now, “Of course it was going to be hard!”) But this thing turned out to be so big, and had so many moving parts, it was hard in ways I just hadn’t anticipated. There was just too much room for error, too much room for failure. So many big and small ways in which we could fail ourselves and each other.

And when I’ve talked to people about these failures and frustrations, over and over again, I’m met by the same response. People say, “But you did it! And no one quit. I’m just so amazed no one quit. I thought at least one of you would quit!”

When people first said this to me, it seemed strange. I realized that it never had really occurred to me that anyone would quit. Even with how physically and emotionally challenging the entire thing was, (day after day, we’d get a break from biking only to have a long simmering tension explode, or we’d finally settle in as teammates, only to be smacked by a monster day of biking) there were really only a few times when the thought occurred to me that someone might abandon the project.

Certainly having the play to perform was a huge part of keeping everyone committed. Everyone was an instrumental member of the cast or crew. There was just no way to jump ship without leaving a huge hole in the play. But I think there was still something else that kept us all in as well.

For each of us, I think there was something very personal, maybe even deeply private, that we wanted to get out of doing this. If you asked me what that thing was, for myself or for anyone else, I’m not sure I’d be able to articulate it in words, and I’m sure it was different for each person. But there was some way that each person needed to push themselves- physically, artistically or socially, to struggle in some kind of new and profoundly difficult way.

This whole project began with a question. The question was “How do you bike a play across the country?” But it’s hard to stay uncommitted to an answer. I’ll admit I was sometimes saddened that the project that once was so idealistically communal in my vision, often felt more like a gathering of individuals, each on their own private quest, with “every man for himself!” 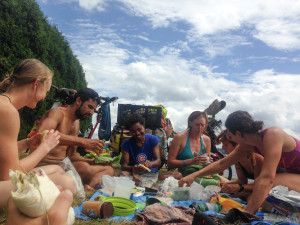 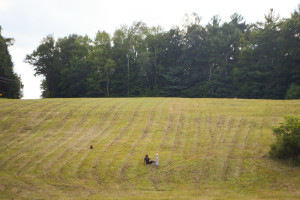 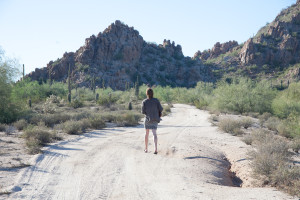 It will no doubt take us each awhile to see how the trip has changed us. How, in addition to our bulging thighs and sturdy calves, more subtle transformations have occurred- in our ways of seeing and thinking about things, our habits of acting and reacting, and our methods of moving through the world.

If you have a question, ask it. Ask it loudly and in all directions and then be quiet and listen carefully for the answers. See how they come curling in, moment by moment, on the contours of people, objects, actions, challenges and opportunities.

If the question was, “How do you bike a play across the country?,” this was our answer, though it was probably one of an infinite number of possible answers.

And here we all are, through to the other side.

Take it easy everybody and enjoy the fall.

Over and out for now.